Is Grain Free Puppy Food Good Or Bad For Your Puppy?

In July 2021, the Food and Drug Administration (FDA) issued its fourth public report regarding the possible link between Dilated Cardiomyopathy (DCM) and grain-free dog food. If you’re reading this post, chances are you’ve heard talk of how grain-free dog food is under the FDA’s scrutiny.

So what does this all mean?

There’s no doubt that you want what’s best for your fur baby, and diet plays a huge role in ensuring that that happens. These days, there are countless diet options for your pup, including wet and dry puppy food, raw puppy diet, homemade food, etc. As a result, we’ve gone from having only a few elite brands to a surplus of options for the best puppy food.

One of those options is grain free puppy food.

But while the diet was initially a winner, the FDA cast a shadow of doubt among grain-free advocates; their pups were potentially eating their way to heart disease!

So which is it: is grain free puppy food a healthy puppy food, or can it cause harm to your young and budding puppy? Let’s find out.

What Is Grain-Free Puppy Food?

Grain free puppy food is any canine grub that doesn’t utilize any grains (whole or refined) or cereals in its recipe. Grains and cereals include:

Typically, both dry and wet puppy food has some kind of grain added to them. Grains are nutritionally rich and are packed with both macronutrients, such as carbohydrates for energy and fiber for digestion, and micronutrients, such as B vitamins, magnesium, iron, and selenium.

Clearly, grains are pretty great. So, why would any dog parent ever even think about switching to a grain-free puppy diet? 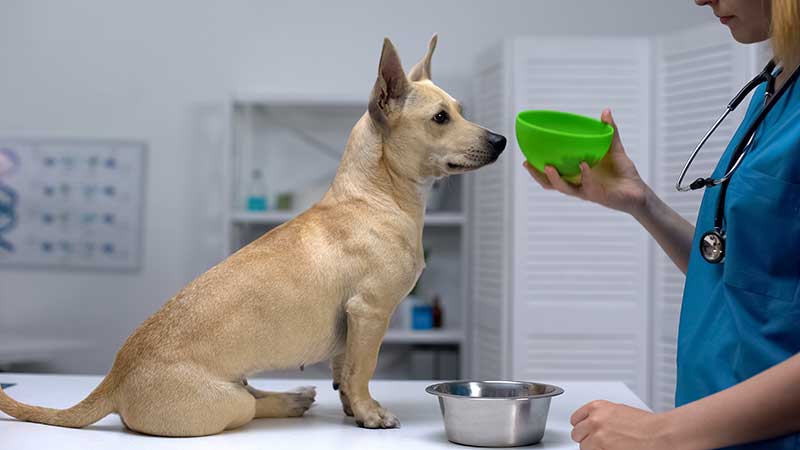 The Logic Behind Grain-Free Diets

The grain-free diet for dogs emerged to accommodate those of our four-legged friends who have food intolerances, allergies, stomach sensitivities, or any adverse reaction to traditional puppy food. Notably, though, grains are actually at the bottom of the list of possible allergens for puppies.

Dogs are actually pretty great at digesting grains, contrary to what their sharp canines might suggest. Thanks to years of living alongside humans, dogs have adapted comfortably to omnivorous diets.

Some dog parents also have unfounded concerns about genetically modified grains in commercial puppy food. These GM grains have been loosely linked to “leaky gut syndrome” in dogs. This has led to a whole other category of “GMO-free puppy food,” which is a whole other discussion on gimmicky dog food.

Puppy food hack: if you want to avoid GM grains, just avoid the most popular ones, such as wheat and rice, as they are the most likely to have been modified. This way, you won’t be shunning all grain-containing food.

The point here is that, at this point, all of these reasons supporting the superiority of grain-free food are merely speculative.

So, does that mean that grain free puppy food is merely a gimmick to complement similar fad diets among humans? Well, yes, and no.

Some dogs may actually have genetic or medical stomach sensitivities that prevent them from digesting grains. Others are just picky eaters and might prefer grain-free food instead.

Just as “vegan equals healthy” is an incorrect equation, so too is “grain-free equals carbs-free.” Yes, grains are carbohydrate-rich foods; but so are a lot of other non-grain ingredients that may be present in your puppy’s food.

Hence, commercial or homemade grain free puppy food may still contain carbohydrate sources such as potatoes, legumes, carrots, peas, or lentils. In some cases, a grain-free diet may contain higher carbohydrates than a grain-containing one.

Unless the package explicitly states “gluten-free,” your choice of grain free puppy food could be loaded with gluten (which, once again, isn’t inherently a bad thing.)

You may have heard something about grain free puppy food containing more meat and, therefore, more protein to replace the grain. However, this isn’t necessarily true; some brands may contain more meat, but mostly the grains are replaced by other carbohydrate sources.

Plus, keep in mind that, once again, more protein does not always equal good. Puppies typically need about 22% protein content in their diet at a growing age. Any more than this would be overkill and lead to weight gain and other complications.

Misconceptions aside, a grain-free diet can actually offer a lot of benefits for your pup, including the following:

The Cons of Grain-Free Puppy Food

Removing grains from your puppy’s diet means removing all the benefits that come along with them. The downside of grain free puppy food is as follows:

This brings us back to our original line of inquiry: why is the FDA making a big fuss about grain-free dog food?

Why Is The FDA Investigating Grain-Free Puppy Food?

In 2018, the FDA’s Center for Veterinary Medicine (CVM) announced its investigation into the potential link between canine DCM and diet. Their first report the following year raised alarm bells for dog parents worldwide who were feeding their fur babies a grain-free diet.

Canine dilated cardiomyopathy is typically a hereditary disease common among dogs, especially larger breeds, such as Dobermans, Great Danes, or Irish Wolfhounds. English and American Cocker Spaniels are also known to have this genetic condition attributed to a taurine deficiency.

Concerningly, though, the DCM cases reported to the FDA “included breeds of dogs not previously known to have a genetic predisposition to the disease.” This means that the emergence of canine DCM was non-hereditary among these cases.

So, what was the culprit?

After cross-referencing the dog’s history, researchers found that the common factor was a grain-free diet rich in peas, lentils, and potatoes.

While there has been plenty of hypothesizing about grain free puppy food causing cardiac issues, there is actually very little research to confirm this.

In fact, the FDA’s most recent report on the issue reveals that there may not be anything intrinsically dangerous about grain free puppy food. The sudden spike in cases over the past five years suggests a change in ingredients and processing may be the culprit. They tried testing for the protein source as a potential cause, but that line of inquiry resulted in a dead-end.

Currently, the investigation is still undergoing, and the FDA is encouraging dog parents to report any cases of DCM to help further the research.

Should You Switch Your Puppy to a Grain-Free Diet?

Let’s conclude with the million-dollar question: considering everything you just learned about grain free puppy food, should you make the switch?

If your puppy’s nutritional or medical needs require that you remove grains from her diet, then grain-free food is a great option. Otherwise, it’s a question of your (and your pup’s) personal preference, as there is no explicit need for it.

If you do decide to take the grain-free route, don’t forget to follow the proper procedure for switching up your pup’s diet.

And, as always, consult with your veterinarian before making any changes to your pup’s diet.